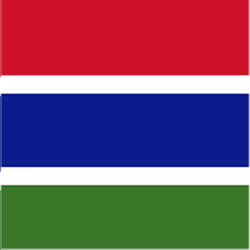 The Gambia, one of the Africa’s smallest mainland countries is blessed with glorious low-key beaches, bustling towns that combine colonial architecture and traditional activities together with abundant wealth of wildlife. Surrounded by Senegal except for a short coastline on the Atlantic Ocean in the west, the country is situated around the Gambia River, which flows through the country’s centre and empties into the Atlantic Ocean.

People & Culture
The Gambia is blessed with a variety of beautiful ethnic groups, each preserving its own language and traditions. The Mandinka ethnicity is the largest, followed by the Fula, Wolof, Jola, Serahule and the Serers as well as the Bianunkas.

There are approximately 3,500 non-African residents including Europeans and families of Lebanese origin (roughly 0.23% of the total population). Most of the European minority are Britons, many of whom left after independence.

There are always vibrant festivals, events full of traditional drumming, energetic dancing as well as customary wrestling matches among the people in traditional villages

Religion
Over 90% Muslim, with the remainder holding either Christian or animist beliefs.

Best time to visit
The Gambia lies in a region that has arguably the most agreeable climate in West Africa; the weather is subtropical, with distinct dry and rainy seasons. From mid November to early June, coastal areas are usually dry, while the rainy season lasts from late June to October.

Inland, the cool season is shorter, and daytime temperatures are very high between March and June. Sunny periods occur on most days, even during the rainy season.Most charter flights run from November to May, coinciding with the time of year when the temperature is most pleasant and humidity is low.

Christmas and Easter are the two busiest travel periods, whilst the shoulder seasons represent the best times to arrive if you wish to escape the crowds.

Getting there
A passport valid for at least three months following departure date from Gambia is required by all nationals referred to in the chart above.

US and South African citizens must obtain a Gambian visa before entering the Gambia. Visa can be obtained at the Gambian High Commission in Dakar. There are single entry visas and multi-entry visas for three month period for visitors and tourists alike.

New Zealanders, Australians, Singaporeans, Malaysians, Taiwanese, British, Finnish, Dutch, and some Europeans may not require visas for stays up to 90 days. Canadians can acquire a 30 day visitor’s visa upon arrival. Always check with the High Commission or Embassy before making travel arrangements.

Flying to Gambia
The Gambia is served by Banjul International Airport and there are regular flights from Nigeria by Arik Air. Also, there are daily flights from Dakar provided by Air Senegal and Slok Air. Most of the airlines that serve the airport are from neighboring African countries, but a few European airlines and charter companies fly into the airport as well.

Flight times
Flight from London to Banjul is usually 6 hours.

Travel by rail
Gambia does not operate international train connection. All train journeys are within the country.

Driving to Gambia
All road borders are shared with Senegal and connections between the two are reasonably efficient. Private taxis can be hired between Dakar (Senegal) and Barra, from which there is a regular ferry service to Banjul. There is a second crossing point at Farafenni, en route from Dakar to Janjangbureh or westwards to Barra.

Getting to Gambia by boat
The Gambia is not very accessible by boat. Although there are freighters sailing to Banjul and it is possible to take a cabin on board one of these, it is not done regularly or cheaply.

Where to go
Abuko Nature Reserve
Walk through the tropical forest of the Abuko Nature Reserve, which is within easy reach of the main resort areas and has crocodiles, monkeys, forest antelope, reptiles and over 300 bird species. It is best early in the morning. Upriver from Banjul, explore Gambian colonial history by visiting the exhibition of the slave trade at Albreda and Jufureh – twin villages that were made famous by Alex Haley’s novel Roots – then cross to James Island, mid-river, to see its ruined fort.

Beautiful beaches
Gunjur and Kartong are southern Gambia’s most pristine beaches and home to a number of excellent eco-retreats. Alternatively visit Kotu, the best beach along The Gambia’s main resort strip.

Janjanbureh Island
Enjoy the beautiful mid-river location of Janjanbureh Island in eastern Gambia, an excellent spot to unwind in an unspoilt rustic environment, with plenty of good places to walk or birdwatch in the vicinity.

Katchikali Crocodile Pool
Meet a friendly croc at this ancient site, sacred to the Mandinka tribe, in the coastal village of Bakau. The crocodiles, though wild, are well fed and docile. Fertility rites are sometimes held here.

Kiang West National Park
Trek through this stunning national park, the most diverse ecosystem in The Gambia, to see more flora and fauna than anywhere else in the country.

Wassu stone circles
In eastern Gambia, catch sight of the fascinating circles of standing stones around Wassu, the most ancient man-made structures in the country, which date from 1200 years ago. The origin of these megalithic circles, which stand between one metre and two and a half metres tall, is shrouded in mystery but they are thought to mark the prehistoric burial grounds of a society long-since vanished.

Birdwatching
Birdwatching is the most popular pastime for visitors to The Gambia. Take a boat into the mangrove creeks of the Tanbi Wetlands around the mouth of the River Gambia, head south to the Tanji Reserve, or travel up-country to the world-renowned Bao Bolong Wetland Reserve to spot some of the country’s many resident and migrant species.

Hotel Novotel Accra
The Novotel Accra is a 4 star hotel located in the heart of the city and offering spacious and elegant rooms accompany by great services and warm hospitality. Read more
Gallery
Not yet posted
Facebook
Twitter
LinkedIn
Email